A beautiful and unique adjustable ring with Shree yantra. Thank you Heritage Silver jewellery (Handmade silver jewellery) for this beautiful customized ring. I greatly appreciate it. Please accept my sincere thanks. 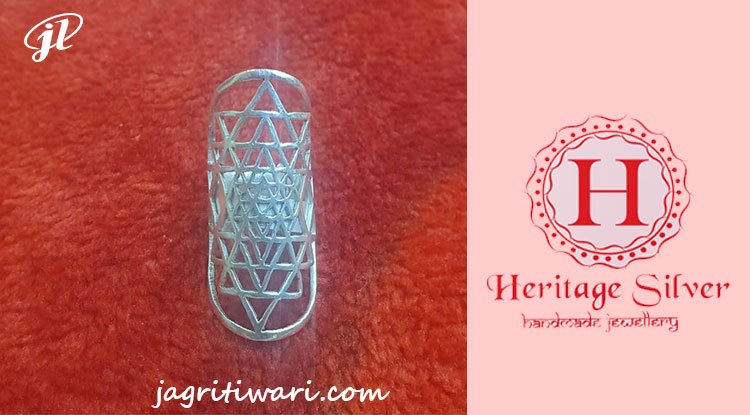 The Sri Chakra or Shri Yantra is a yantra formed by nine interlocking triangles that surround and radiate out from the central (bindu) point, the junction point between the physical universe and its unmanifest source. It represents the goddess in her form of Shri Lalitha or Tripura Sundari, "the beauty of the three worlds". Four of the triangles point upwards, representing Shiva or the Masculine. Five of these triangles point downwards, representing Shakti or the Feminine. Thus the Sri Yantra also represents the union of Masculine Divine and Feminine Divine. Because it is composed of nine triangles, it is also known as the Navayoni Chakra.

Shri Yantra is strongly connected with Shri Suktam Stotram chant. It feeds the yantra. It energizes the yantra. Coupling of these 2 Vedic things yields the best outcome of all-round prosperity for the sadhak. Precise carving or etching of this yantra is essential. This yantra is made in 2D & 3D forms. Energy flow will depend on its accuracy. It is a divine article and therefore needs to be handled accordingly. It is used in personal & structural vastu.

Shree Yantra is a powerful and unfailing instrument that attracts Laxmi, the Goddess of Wealth and Prosperity. She is in fact compelled to manifest at the place where such a Mantra-energised and consecrated Yantra is placed.

What is a Yantra?

In Sanskrit, the word “yantra” comes from the root word “yam,” which means “instrument” or “support,” and “tra,” derived from “trana,” meaning “release from bondage.” A yantra is an instrument or tool, for meditation and contemplation and supports spiritual liberation. There are hundreds of yantra designs related to deities, principles, and planets. Used in ceremonies and rituals, yantra designs can be found on paper or bark, or created from flower petals, ash, and rice.

For mediation practices or “vastu,” the vedic version of feng shui, a yantra is embossed on a square copper plate electroplated with gold. The plates are then ritually “charged” by priests — meaning that the physical objected is “tuned” to a specific vibration or energy. Once charged, the yantra is viewed as a sacred object.

The Queen of Yantras: The Shri Yantra

The Shri Yantra, called the “queen of yantras,” (rajayantra) is the symbol of the great divine mother principle, the source of all energy, power, and creativity. Vedic traditions, specifically the Shri Vidya school of tantra, regard the design as the representation of the universe as well as the body of the goddess related to the feminine principle of shakti or energy. Every line, triangle, and lotus petal symbolizes a specific type of shakti.

Having this Yantra is undeniably the easiest and best way of bidding adieu to one's financial problems forever. And its use can be as diverse as the means for acquiring wealth that manifest once it is obtained. A doctor with a bad practice can establish it in his chamber and pull more clients, a shopkeeper can similarly draw new customers in hordes by fixing it in his shop, a factory owner can expect a bloom in production by worshipping the Yantra, while a person in job can get an out of turn promotion and pay rise by keeping the Yantra at home or office. The possibilities are unlimited and whichever field you might be in, the Yantra proves to be a marvellous means to a better, wealthier and prosperous life.

People today feel that they do not get returns in proportion to their sincere and honest efforts. Thus much frustrated they are easily lured by corrupt means to get rich quick. If only they knew that by merely making this divine instrument of Goddess Laxmi a part of their lives they could literally wallow in wealth for rest of their lives!

From the very ancient times Shree Yantra has been used by kings, sages and businessmen alike. Shankaracharya himself established a Yantra at the four holy spiritual seats that he set up at Dwarka, Shingeri, Puri and Badrinath. What more the wealthiest of businessmen, industrialists, actors, politicians very well recognise the power of this amazing Yantra and it forms an inseparable part of their lives. Many billionaires from abroad are also known to reap the benefits of this miraculous wealth-puller.

Design: Made in pure silver. Adjustable ring for easy wearing.

It is ideally worn in right ring finger. Wear this ring so that the yantra faces away from you.

Starting to Make a Game - Making a Splash Screen in Unity3D

Instagram Giveway, I win a free stuff in contests.