Marriage: From A Woman’s Perspective

Every girl in our society is brought up to be adjusting by nature, an expert at adapting herself as per any situation. Afterall, she’ll get married one day and this quality to be able to change her way of life and even her personality, in the name of marital adjustments, will then come in handy. 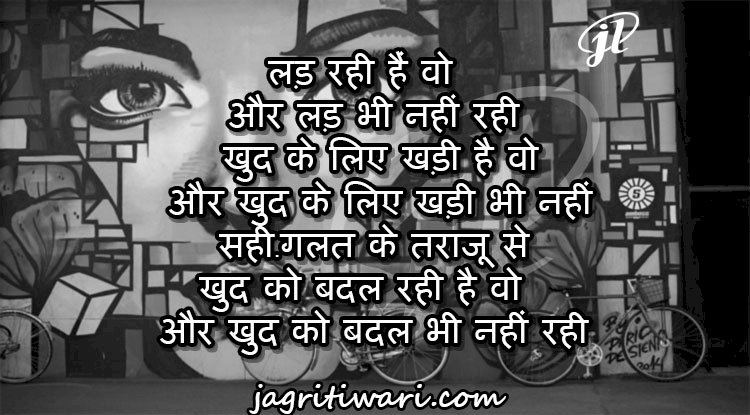 No one can imagine the life of a girl, even that girl herself.

And she is not even fighting

She stands up for herself

And not even standing up for herself

From the scales of right to wrong, she is changing herself

And she is not even changing herself"

It is the destiny of girls to shift their home after their marriage and make a new home for them. Girls are mentally prepared from their childhood that their home is their husband home. They are psychologically prepared to meet the change in environment. New relatives, new friends, varied culture, varied food etc;

Why must a woman change herself to fit in after marriage?

Why is something as spontaneous and ordinary as laughter prone to stigmatisation for women in our country?

Don’t laugh loudly, you are too high pitched, why are you so expressive when you talk…the policing is unending.

The worst part is that we endure this policing from the minute we are old enough to be coached to be well-mannered. A girl should sit with her legs crossed, she must never talk back, she must always wear “decent” clothes.

Boundations and adjustments in a marriage are two separate things and it is high time our society understood the difference and how the former leads to unhappy and unfulfilling marriages which do not bode well for either partner.

From the time I was a child, I was highly ambitious. And somehow, I had a knack of observing and analysing things in my surroundings, especially if it was about inequality between male and female.

Is this right? On one hand, we commonly hear a phrase that a marriage unites two individuals and they are responsible to fulfil their duties. But as much I observed over the years, it seems like that it is only a woman’s responsibility. What all a girl expects after marriage, what challenges she faces, what sacrifices she makes and what is the reality? Are the questions I am addressing in this post.

Every girl has dreams about her wedding life. And she has some expectations from her husband, who is suppose to work together and fulfil each other’s responsibilities and promises. If she is a career oriented woman, she wants that autonomy of having to depend less on the husband’s income, and also to earn and save together for the future.

But the reality is way different from the expectations. Most men wish not to part with their parents, post marriage. Mother In-law’s tend not to allow her daughter In-law to work or study. Usually, traditional, orthodox families expect their daughter In-laws to take responsibility of the house, and not to juggle with career ambition. Spending money too is frowned upon, even if the girl earns substantial money.

You see, nowadays, any voice raised in terms of equality for women is considered rebellious and labelled as FEMINISM. It is not about women suppressing or dominating, but to be considered as an equal and to be given similar autonomy and freedom.

Do let us know of your thoughts in the comments.

Vastu tips for office, to bring prosperity at work

Instagram Giveway, I win a free stuff in contests.

Why Hiring an Interior Designer is Good for You